A black eye and a taste of heaven

This is an old post; I wrote it when Lizzy was eight, and it's only needed a little updating now that she's eleven. Yesterday was her birthday and it all came back to me once again.

Yesterday was my little girl's eleventh birthday and she was more excited than an excited thing. We did all the stuff; we did presents, we did birthday-tea-full-of-treats-with-little-nutritional value, we did balloons, we did singing, we did blowing out candles. We did hugs and we did great big smiles. We did reminiscing, Daddy and me.

I gave birth to Elizabeth after a rapid labour that confounded the midwives. I had a single paracetamol for pain relief at about half past eight because the midwife who examined me thought I had a very long way to go and assumed I was a bit of a wuss to be asking about it so early in the game. When I got hold of the gas and air I left teeth-marks in the mouthpiece and nail marks where I had it clenched in my fist. Daddy arrived at half past nine fresh off a train from London and walked in nonchalantly just in time for the punchline.

At 10.16pm, Elizabeth Lucy took everyone by surprise and was born on a plinth in an examination room on the hottest day of the year 2005, and all the fans were in use elsewhere. It was warm work.

I held my little girl in my arms and I was filled with wonder. Long fingers, a mass of light brown hair, button nose, little chin just like her Daddy's and a big black eye. She was brand new, moments old,  with a lusty cry before she was even fully born.

Red and bruised, head slightly elongated, one eye bloodshot and swollen shut, little rosebud lips giving us glimpses of a little pointy tongue, the sharpest of tiny fingernails. Beautiful? Well, yes and no. Or more accurately, no - and yes, breathtakingly beautiful. A whole person made up of half me and half Daddy. Two of everything down the sides and one of everything down the middle. Breathing, crying, suckling, waving, kicking, snuggling. Fragile and yet so strong. Miraculous.

I can't explain it, that thing that happened that night. The way that I went in to the hospital someone's wife and someone's daughter and came out still those things but now someone's mother too. Everything changed that night. The world tilted slightly and never righted itself; it's strange that nobody ever noticed but me. 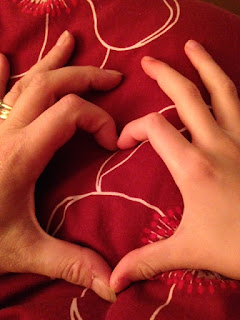 Even after the midwife cut the cord, Elizabeth was attached to me. She always will be. I tell her that she's my baby girl and sometimes she snuggles closer when I say that and other times she stiffens and tells me in no uncertain terms that she's not a baby, she's a grown up girl. She has a little sister, also my baby girl, and Lizzy sometimes feels the weight of older sister responsibility very keenly. Lizzy is my oldest, my firstborn, my worrier. She's my vibrant, energetic, imaginative, complicated, softhearted, fearless dynamo of a daughter.

Things weigh heavily on my Lizzy, her self-esteem sometimes is tissue-paper fragile and we work and we work to build her up.

I know it's not the way to bring up a brave, strong woman, but I'd spare her every second of pain and hurt if I could, for the whole of her life. I'd rather the rough stuff happens dot me than her. From complicated and painful orthodontics to disaster in the final of the 100m butterfly to the boy who asked her to a party and then told her he'd been joking when she said yes.

And since I'm no stoic myself, it's nothing short of a miracle that I'd do that, and do it in an instant. But a miracle did happen that night when I had my baby. I became someone different when I became a mummy. I'm still growing into that person; I suspect it might take me the rest of my life. It's not easy. 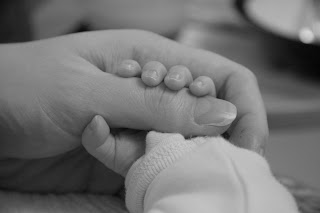 Not easy at all, but often wonderful. I sat on the side of her bed last night at 10.16pm and I stroked her hair and kissed her forehead and inhaled the fragrance of her as she slept.

When she was a baby I used to carry her with her head on my chest and I would breathe in her baby smell and I remember offering her to another family member to sniff because she smelled so beautiful. They smiled politely but they didn't get it. I wonder if it's just for me - some primal thing, some deeply profound connection just for mother and daughter? I don't know. I do know that from the moment I took my first breath as a mummy, it's my favourite fragrance in the world, matched only by that of her little sister.

They say that smell is the sense most closely linked to memory - then maybe that's why. Last night I remembered like yesterday that night in the tiny room on the hard, high, narrow examination table, hot and exhausted and dazed, with my baby girl on my chest.

Nobody tells you these things about having a baby. Nobody tells you the true horror of the sleep deprivation that makes you feel as if life is not worth living. Nobody tells you about the dilemmas of high temperatures and endless crying and inoculations and school selection. No-one teaches you how to untangle baby-fine hair or comb for nits or how to use hair straighteners because that's what all the girls at school do. No-one tells you what to do when your baby girl is bullied, or bullies, or doesn't get on with a teacher. Nobody tells you how to prepare your daughter for senior school, or puberty, or ready her for success and failure.

You play it by ear, and sometimes the notes are all muddled up.

It's a good job you don't get a glimpse of the soul searching that goes on when your baby girl has no confidence, or loses sleep to anxiety, or cries too easily when things go wrong. Was it me? My inadequacy complex was genetic? Or have I criticised too much, encouraged too little, corrected too forcibly? Crushed when I should have coaxed? Demolished when I should have built up?

Don't get me started. I'm eleven years in to this motherhood thing and the truth is that I don't know what I'm doing any more than I did that night in June eleven years ago. There's no instruction booklet and no map. I just feel my way; every year I have fewer answers. Sometimes we skip along at a lovely pace, everyone smiling, and the scenery is wonderful. I take lots of pictures and get very sentimental with souvenirs. Other times I get completely lost. I hit dead ends and unexpected detours and I have to crawl my way back. I ask a lot of questions and cry a lot of tears, inwardly and outwardly.

Nobody tells you how to do it. I think that's pretty normal, isn't it?

But the most breathtakingly powerful thing that nobody ever tells you is that the whole world changes.

The whole world changes. So much that I'll never forget a single detail of 10.16pm on that evening eight years ago and when I look down at the long, lean frame of my beautiful sleeping girl, arms flung out in her birthday pyjamas, my head fills with memories of first breaths, first smiles, first steps - and my heart swells.

Nobody tells you how much you'll love them.

It's a little taste of heaven.