I was in a room. A square room like a line drawing, painted beige. Like an illustration from a corporate manual for fire drills or something. A square room with no windows and no furniture. But there was a door.

The door was the door to Fear, and it stood wide open. Not inviting but threatening. From where I was standing, I could see that out there was nothing. Well, I could see sky, wispy, high clouds, but nothing else. A void. Empty space. It was so frightening that I backed away as far as I could until my back was pressed against the opposite wall. I desperately didn't want to go anywhere near the doorway.

Then I realised that God was in the room with me. He was a man, but I can't describe his face. He was tall, and strong, wearing a cable-knit sweater. He smiled at me, and walked over to the door. He looked out, and I called him to come back away from the edge. It's dangerous, I said. He half turned to me and smiled. He leaned against the door frame, and held out his hand to me.

Shall we go? He said.

He wanted me to walk through the doorway with him. I refused, shaking my head vigorously, eyes wide. I pressed myself harder against the wall. He held out his hand again and leaned towards me.

Moments went by. The room was still. Me, pressed tight against the wall full of fear and anxiety; God, relaxed and patient, encouraging, his hand outstretched. I wanted so badly to trust him. My heart was pounding and my head ached.

I walked towards him a few small steps and he met me in the middle of the room. I took his left hand and it closed around mine, big and warm and rough. I held on tightly. We stood on the threshold of the door for a second and then simultaneously we stepped out.

My eyes were tightly closed.

I fell forwards as if I'd tripped over something, until I was in a lying position, my left hand held out in front of me as if to break my fall. God held onto my right hand. We didn't fall. 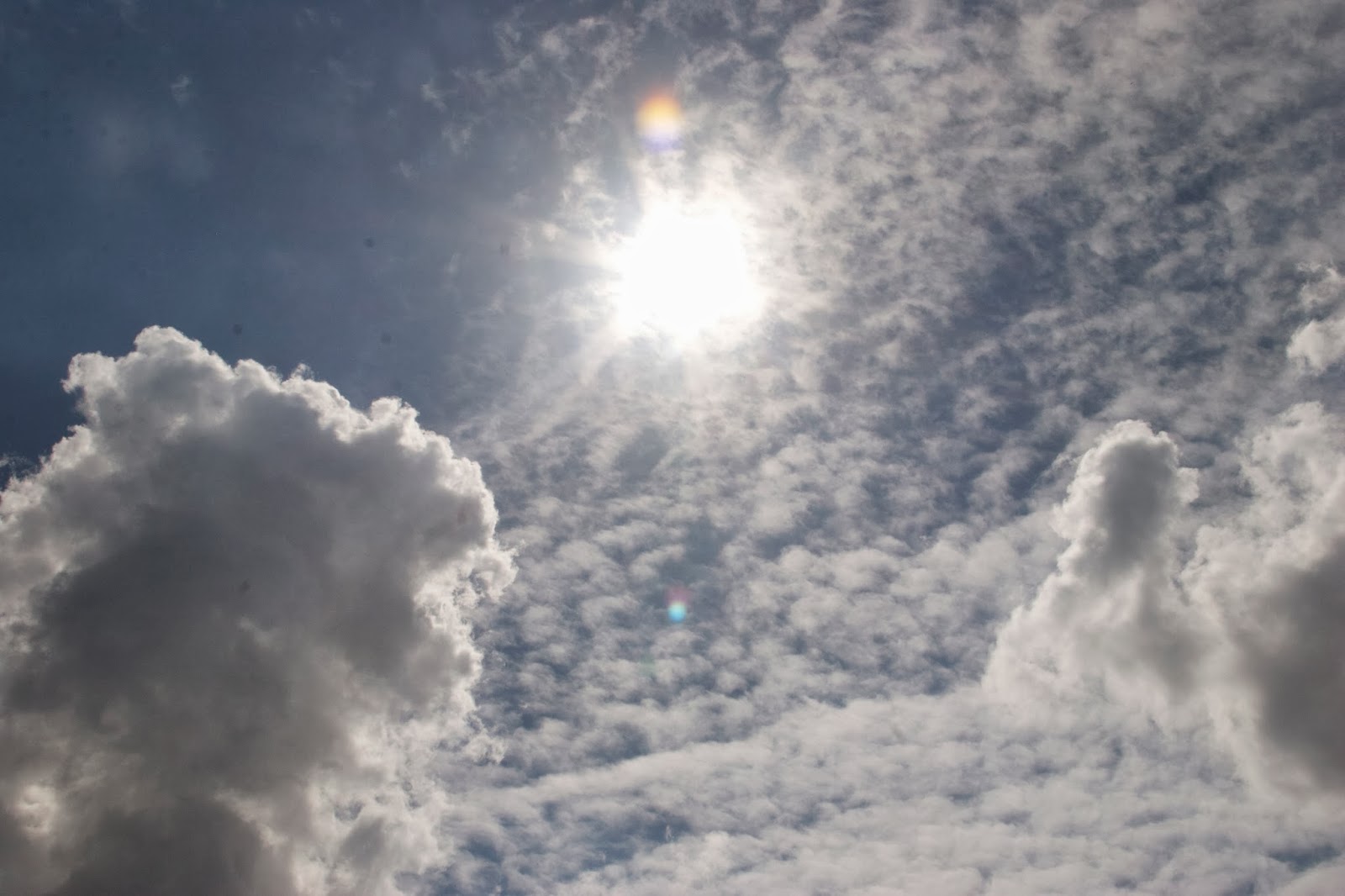 I was still tense and anxious. I was afraid that God would let go of me. I was afraid that he'd pull his hand away and leave me to try to fly on my own, or to fall. He understood, and he pulled me towards him until he could reach over me, arm around my shoulders, and hold both hands, one in each of his.

Is that better? he asked.

Yes, I replied. I could feel the warmth and strength of his body alongside mine. I was close to him - under his arm. I felt safe.

God looked at me and laughed at the relief and wonder he saw on my face. He was delighted that I was enjoying myself. He squeezed my hands and I squeezed back, nestled close.

The air was cool and clear, refreshing. When we flew through wisps of cloud they were made of sparkling droplets. I felt exhilarated, thoroughly alive. Free. Gliding, soaring, somehow flying. It was effortless. I was so relaxed that I could take in the earth-scene below, I could look around - look into the laughing eyes of God, full of love and kindness; I could look up into the patterns that the clouds made far above as the sky became a darker shade of blue.

I could breathe. I was filling my lungs with clean, pure air. The wind was in my hair but it was silent, gentle, invigorating. I was laughing with the sheer joy of freedom.

With God beside me, I could fly.

I looked behind me to see if the door was still there; it was. There was a box hanging in the sky some distance away. The door was now closed - there was no way back even if I'd wanted to go back into the square room. I didn't want to go back there. How could I ever have thought that I was safer in there? A small box, hanging in space thousands of feet above the earth?

I realised how small and claustrophobic that room had been. How stifling, suffocating; hot and oppressive. And out here, holding onto the hand of the living God, soaring and gliding in the open air among the clouds, cool and fresh and free.

I would never go back there. I glanced back once more to see the sealed door, but it had disappeared.

I looked at God, and he smiled and held me closer.