I saw a little crib in a Nativity tableau the other day. There are a multitude out there, with Mary serene in a spotless blue dress, Joseph indistinguishable from the shepherds, three wise men, several months too early and an elderly Tiny Tears doll swaddled in a crochet blanket, all squashed into a cosy-looking stable. It made me think.


I was born in poverty, too.

Not the sort of poverty that speaks of cold and deprivation; oh no. I have, all my life, been warm and looked after and well fed (just look at me) and I had my own Tiny Tears and all the accessories. No, not that sort of poverty. 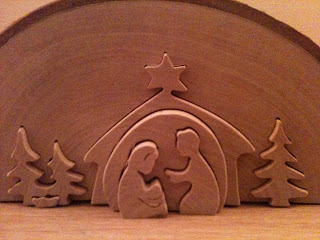 When I was born, the birth that I'm talking about, I was as poor as it's possible to be in every way that matters. I had nothing, and the day I realised that was the day that I was born.

That should be my birthday, really; that was when life began for real. I realised the lack - the void. The gut-wrenching poverty. The absence. The emptiness. The need.

For me, I didn't have to live with that feeling of poverty too long, for no sooner had I realised that I did not have the only thing that mattered, that I longed for it, asked for it - then it was given to me.
You are endlessly generous like that.

How much more awful for those who feel that desperation but don't know where to come to find it, this new birth. It must break your heart, Father God.

That day you stripped everything away from me to reveal what actually mattered. I had nothing, and my birth in poverty was yet an elevation for me, for the Creator of the world had business with me. With me. To touch me with the revelation of my need - the moment I understood and my soul reached for you was the moment that the floodgates of blessing from Heaven opened and I became rich.

I look at you, baby boy in an MDF manger, and I realise you knew poverty too.

For you - you had everything, Everything, and you chose to lay it aside to come to this place of filth and cold and hurt to be close to us. You laid aside your majesty, as the song goes, and chose the sweat and smells and roughness of humanity.

You were rich, and you became poor. I was poor, and you gave me riches.

You and I, reborn - humble, vulnerable nakedness. For you, the vastness of Almighty God, shrunk to inhabit a tiny kicking, crying, feeding baby. For me, the smallness and pettiness of a created being expansively given another chance by the grace of the One who reached down and lifted up my chin so that He could look into my eyes with love.

I am a baby as you were. I have all that I need only because you provide it. Mary fed you, cleaned you, dressed you, sang to you and loved you into childhood, adulthood, to execution and beyond. I live because you sustain me. Everything that I have comes from you. If you forgot about me for one second I am sure that I would cease to be. I am hopelessly dependent.

I am uncomfortable in my manger of hay; it prickles. I'd like it to be more comfy. Sometimes I don't feel at home because you have given me that longing for my eternal home, and yet you, you lived among us naturally, freely, as if you never felt homesick for the heaven that you had left behind to come here to us.

I sense the Somewhere Else, sometimes; me, insensitive and short-sighted as I am, and yet the King of Glory walked purposefully away from that place; you chose to become small. The limitless in a limited body. The transcendental made finite.

I am lifted gently out of the dirt to be called a Child of God. A crown has been placed on my head and a robe around my shoulders even though there I am hopelessly unworthy.

I live honoured as your daughter, heir to a wonderful place in your Kingdom. You, the very Son of God, fought your way down the birth canal of a peasant girl and landed in straw, surrounded by livestock. With the hands that arranged the stars in the heavens and created the animals and the birds you'd have brushed against the roughness and splinters of an animal's feeding trough. With your first breaths you would have inhaled the odour of cattle. Me, I'm used to the stench of life down here - it seems normal to me, but to you, it must have been strange indeed. You came from a place of peace, beauty, power and honour and put yourself in the hands of two poor, bewildered kids, far from home, who had only the faintest inkling of the magnitude of what was happening.

My rebirth opens up miraculous doors of wonder and possibility; you became confined in a tiny, frail body, kicking and wailing, feeding and sleeping.

You were born so that I could be born again.

And I've realised by staring at that roughly-made trough-cradle, that it is when I stand with nothing, without anything at all, just me as you made me, unable to conceal a single thing, a single part of me - that's when I am most blessed. I am a new creation.

You had it all, just as you have once again; you turned your back on your glory to become one of us.

You were exalted, and you became weak. I am weak, and you raise me up. I can't get my head around it. You know what it feels like to be poor, to be vulnerable, to be human.

The queue for haloes

Katy, then aged five, was getting dressed in her costume for the school Christmas play. In reception, most of the girls were making up the heavenly host of angels, and most of the boys were a fairly rowdy bunch of shepherds. Everyone wanted to be Mary, or Joseph, or (for some reason, that year) the Innkeeper, but no, the main characters were selected from the older classes.

I remember clearly arriving at school and entering the classroom to find a scrum of harassed parents all struggling to shoehorn their excited children into their costumes.

Teatowels abounded, as did satin, glitter and tinsel.  Katy's angel costume (Sainsbury's, £5.99; I am no seamstress) was on the desk and we were expected to get our little angels dressed for the last rehearsal before the Main Performance later that day.

Katy was distracted by the classroom decorations and was more interested in pointing out her moose - or reindeer, or whatever - among the herd on the wall. A little boy next to her began to cry because his tea towel had a mysterious stain on it, and his mother was mortified. Someone else's wings had come un-velcroed and there was some stamping going on until Mummy could find them in the crush and stick them back on. Nobody noticed that they were now upside down. 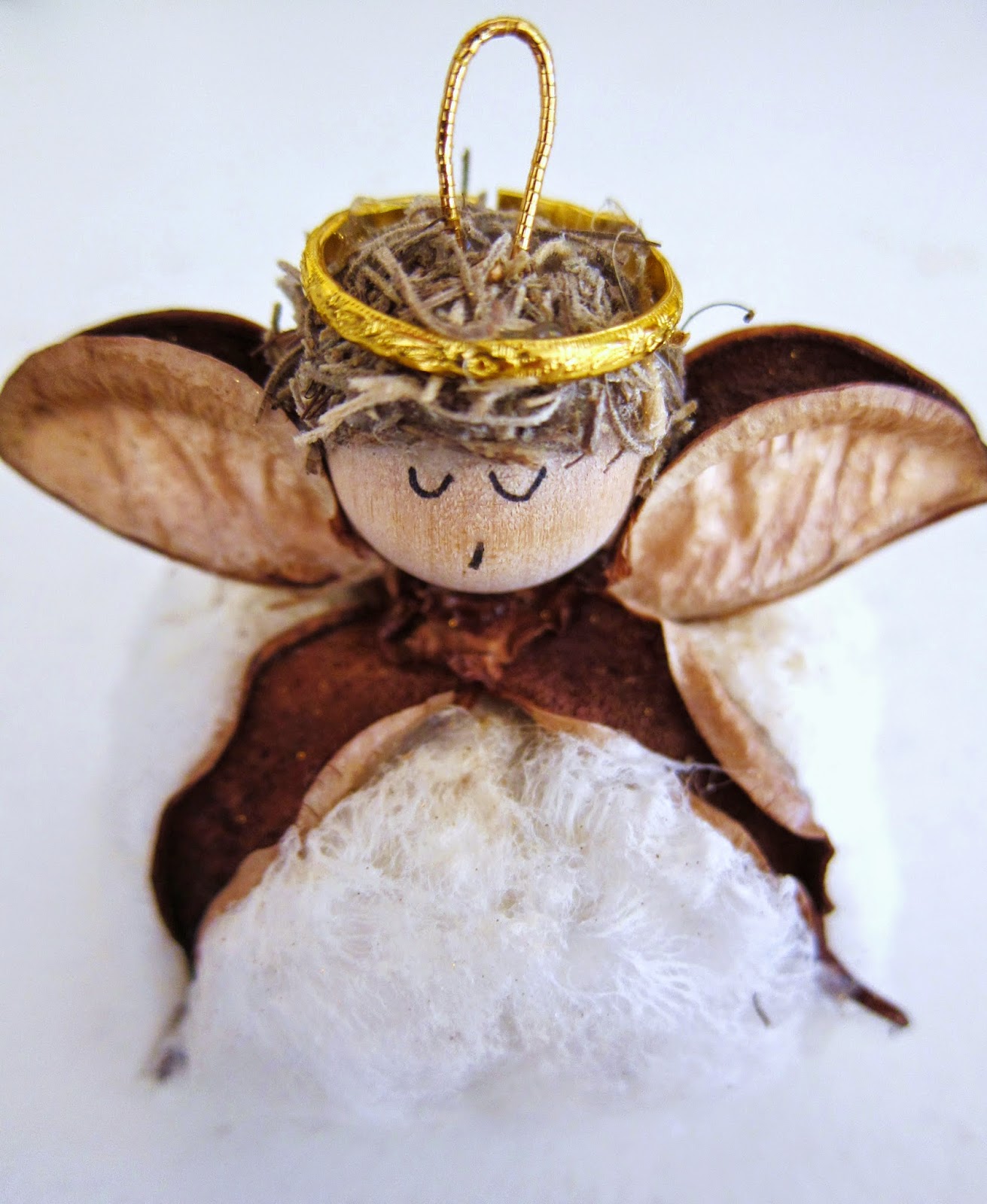 Katy attempted to put her white tights on over the top of her outdoor shoes and I was getting hot and bothered in my jacket and woolly hat. It was quite stressful. Things were said, and I know that you know what I mean.

And then, all of a sudden, she turns around and there is my five year old girl in a white and gold angel costume, standing on tiptoe for a cuddle. Well, I had difficulty letting her go.

One more hurdle - she had to fetch a halo from the teacher who was doling them out and she needed me to help her put it on. Katy has very silky, slippery hair, and so a headband with a lump of wire and tinsel attached was a bit of a balancing act.

She sashayed off for her halo. Minutes later she returned with a small thundercloud where the halo should have been. And then it came:

(Accusingly) 'Mummy, how come I'm always last in the queue when they're giving out haloes?'

There's one to write down and repeat in a wedding speech one day. My gorgeous little girl stood there  with a scowl and her halo all lopsided. She wanted one of the newer haloes; one that wasn't slightly battered from being fetched out every December for the last few years, but the shiny ones had already gone by the time she got to the front of the queue.

Her halo was not what she wanted it to be.

I think I was also at the back of the queue when they gave out haloes. I don't know anyone who was at the front, to be honest, though I suspect I know a few who were further up than I was. From where I'm standing, other people's haloes seem much more highly polished than mine.

Katy's five and I was impatient, frustrated and irritated; ready to shout at her (and indeed, probably would have done had we been at home and not in a sea of other, more rational, patient Mummies and Daddies). She was wriggly when I wanted her to be still. She was excited when I wanted her to be calm. She was happy and distracted and I was narked about having to get her into her white tights and then realised that they were on the wrong way round and the heels were in front. I snapped at her.

She was an angel in the school play but her halo wasn't quite right.

My halo is a bit battered too, Lord God. It droops quite often and I'm sure that it should shine a bit brighter than it does. But you love me anyway.

She stood there, my little angel, looking disgruntled and disappointed and I pulled her into my arms for a hug and we cuddled for a long few minutes, right there in the middle of the busy hustle and bustle of pre-dress rehearsal preparations in the reception class at school.

Two of us with less than perfect haloes.
Posted by Helen at 6:59 pm 4 comments: