I had no idea how tired I was until I got to Scargill this year.

It’s a short drive to Scargill from Skipton, which looks a lovely town, but I pass by the inviting cafes and intriguing independent shops because I know that real treasure is just around the bend. And the other bends. And over the hills, and across the valley.

Scargill is a place to breathe. I think I stopped breathing a while ago; maybe as long as two years. I’ve become busier and busier; aware that my jokes about living on a hamster-wheel are no longer funny, but the extent of my suffocation was only evident this weekend.

I have dreams that have been shelved, because there’s just no room for them.

I’ve told myself that I’ve put them aside just for now, that life won’t always be so frantic, that there are seasons for everything, and this season is one of constant motion, clock-watching, going, doing, coming back. That might just be it.  Around that distant bend might be a time when there are fewer demands on me, physically and emotionally.

But where is the bend?  Will I ever get there?  Isn’t life for living right now? 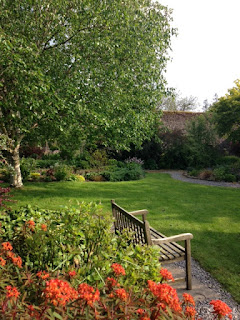 Continued over at the Association of Christian Writers' blog, More than Writers. Come over and say hello?