Right. This might be the most tenuous link yet for a post on the More Than Writers blog, but here goes.

I shall push on, regardless.

The other night I woke up in the early hours. It was unsurprising as we’ve been having hot, humid nights and bouts of thunder and lightning, and it was one of those nights. The rain had subsided and the thunder moved on to terrorise other people some distance away but the occasional lightning flash lit up the room for long seconds at a time. 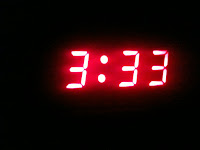 I glanced at the clock only to find that it wasn't there.

Continued over at More Than Writers, the Association of Christian Writers' Blog, where I post on the 23rd of every month. Do come and have a look round.

Find out more about the ACW by checking out their website: www.christianwriters.org.uk or the ACW Facebook group, where friendly and encouraging writer people go to chat and discuss and put off the point at which they actually should be doing some writing.