One for the To Read pile - 'Undivided Heart' by Lucy Mills

Today I'm delighted to let you know about a book written by my friend and fellow ACW member, Lucy Mills.  It's on my To Read pile.  Having enjoyed and been challenged by her first book, 'Forgetful Heart', I didn't hesitate to order myself a copy.


Lucy has a wonderfully engaging style of writing and has an eye for finding little nuggets of truth that you may not have noticed in passages that you think you know well. And the best bit is that she's gentle, honest, wise - and most important, very readable.

Here's what her publisher has to say about the book: 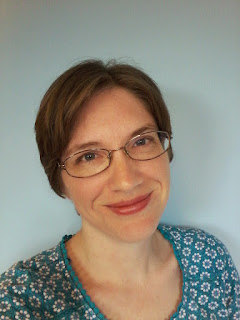 Undivided Heart is a book about identity and what drives us to do the things we do. Lucy explores what motivates and inspires (and worries) us, what we really want in life, and what makes us who we are. Along the way, she discusses a wide range of topics, including fear and pain, doubt and trust, possessions and money, hope, suffering, encouragement and expectation, ideas of heaven, and the nature of love.
She looks at helpful and unhelpful patterns of behaviour, the concept of fixed and growth mindsets, how ‘labels’ have the ability to make idols or prisons in our lives, and how the selfie culture and age of instant feedback brought about by social media can encourage us to project selective images of ourselves.

As someone who suffers from M.E. and chronic fatigue syndrome, Lucy knows the importance of pacing herself and taking life one day at a time – and realising that things don’t always turn out as you had expected or hoped.

In this wonderfully honest and open book, she draws on her personal experience, alongside Bible passages, quotations from a wide range of writers and her own original poetry, inviting the reader to join her on the journey to ‘reassemble the far-flung pieces’ of our hearts. 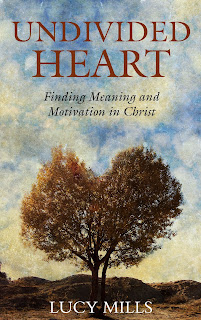 
Jesus said to her, ‘Woman, why are you weeping? Whom are you looking for?’ Supposing him to be the gardener, she said to him, ‘Sir, if you have carried him away, tell me where you have laid him, and I will take him away.’ Jesus said to her, ‘Mary!’ She turned and said to him in Hebrew, ‘Rabbouni!’ (which means Teacher).
John 20:15-16

The risen Jesus was both familiar and unfamiliar. He revealed himself with a word to Mary Magdalene; in the speaking of her name, she recognised the rabbi she loved.

On the Emmaus road, Jesus walked with two of his disciples. They didn’t realise who was speaking to them until he gave thanks and broke bread (Luke 24:13ff). It was an action he had made to feed thousands; one he made in the upper room, mere hours before his arrest; an action he had, presumably, performed with his disciples in a myriad of mundane, marvellous moments.

Was it that Jesus in his resurrection body was changed in appearance? Or was there something different going on – a kind of deliberate hiddenness and then unveiling, a picture of a journey from limited knowledge to full understanding?

Continuing in Luke’s account, after Cleopas and his companion rushed back to Jerusalem, Jesus then appeared to his gathered disciples. They thought he was a ghost, even though he had already ‘appeared to Simon’. In their worldview, a physical body could not just materialise. Jesus responded to their fear and disbelief by saying: ‘Touch me and see; for a ghost does not have flesh and bones as you see that I have.’ His body was corporeal – it had substance. He then ate some fish to reassure them further (Luke 24:36-41).

In John’s gospel, we’re told of Thomas – poor, heartbroken Thomas – who wanted to follow Jesus anywhere, but had missed seeing his risen Lord. How would that feel? He was already living with the fact that he who had said he would die with Jesus (see John 11:16) had, instead, fled like all the others. So deep-set was his grief and incredulity that he refused to listen to the others proclaiming they had seen the Lord: ‘Unless I see the mark of the nails in his hands, and put my finger in the mark of the nails and my hand in his side, I will not believe.’

These are the words of a grieving man. I dislike the term ‘doubting Thomas’ – for he was not the only disciple to display doubt in Jesus. Jesus, all grace, met him on his terms, offering his wounds for Thomas to touch – but in that moment all Thomas can do is fall at Jesus’s feet, proclaiming: ‘my Lord and my God!’[1]

Such is the worship engendered by an encounter with the risen messiah. We remember Thomas by his doubt, but he has such a stunning line in the story – my Lord and my God.

No longer just his Lord. His God.

There is another account in John, a beachside encounter where, again, the disciples do not initially realise who it is they are seeing. Jesus is recognised in the act of provision – a catch of fish, where they had previously caught nothing. ‘It is the Lord!’ Peter yells, jumping out of the boat and splashing to shore – although he does pause to put some clothes on first![2]

We may grieve, like Mary, as we search for our living Christ, then find him standing next to us, calling our names. Like those on the road to Emmaus, we can have our eyes unveiled, our hearts set aflame, Jesus revealed to us.

We may not ‘see’ as Thomas did, but we are called to a deeper belief in our resurrected Lord. We learn from Jesus’ response to Thomas: ‘You believe because you have seen. Blessed are those who believe but have not seen…’ (John 20:29, NIV)

We can splash through the waves as Peter did, delighted when we recognise our Lord. This Jesus – this crucified and risen Jesus – is the true definer and motivator of our lives, calling us from death into life. 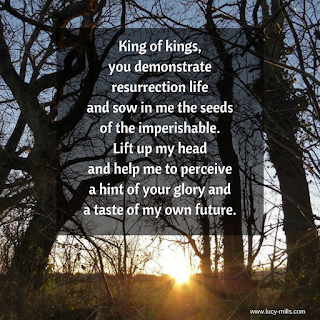 Amen to that. I think this is going to be worth a read.

To get your copy of 'Undivided Heart', check out Lucy's website:
www.lucy-mills.com/undivided-heart
You'll be able to find a copy of 'Forgetful Heart' there as well.

The other day I was surfing aimlessly - I mean, writing something profound - and I was distracted  by a ping from my inbox. As every writer knows, a ping from the inbox requires immediate attention, so I answered the call. 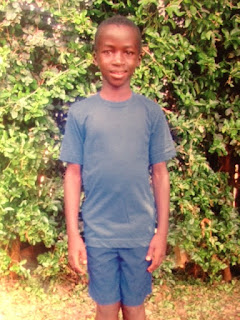 It was an alert to say that there had been a message from the child we sponsor in Uganda.

His name is Brian, he's ten years old and he likes football and animals. He's doing well in school, and passed his exam last year. He wants to be 'an army man' when he leaves school. Or maybe a doctor.

Continued over at The Association of Christian Writers' Blog, which is called 'More Than Writers' I contribute on the 23rd of each month.

Come and say hello and have a look around.
Posted by Helen at 7:38 pm No comments: