Apologies if this is an odd sort of post. It's  something that happened earlier this week and it's not quite straight in my mind yet and it's hard to talk about, partly because it's deeply personal, but also because it's still a bit raw and unprocessed. I'm sort of processing as I write.

On Monday I sat down to pray with two very wise and perceptive ladies that don't know me at all. We were talking about God the Father, families, our Christian journey, that kind of thing. I found myself telling them of a memory I have from junior school. The memory for me is frozen into a photograph.

There's a little girl in a blue and white checked school uniform dress standing in a school hall. Actually, she's not so little - she's about nine or ten but she's tall for her age and ... er... not thin. She has long golden hair over her shoulder and she's looking down and smiling. She has a trophy in her hands; a silver rose bowl. Standing back slightly to her right is a beaming elderly lady in a patterned dress, and all around are people in chairs who appear to be clapping.... 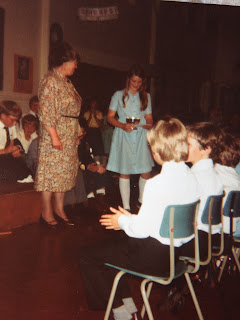 Continued at The Association of Christian Writers' Blog: More Than Writers where I post on the 23rd of each month. This month's post is a little bit deep and introspective, but at least it's not my attempt at poetry, hey?

Every cloud has a silver lining.