I have been swimming for almost a year, now. Well, I've been swimming since I was about eight, off and on, after a fashion, but my latest adventure in the pool has been going for round about twelve months.

About a year ago I watched my eldest daughter train with her swimming squad and, chin on my hand, I thought to myself, 'I'd have loved to do this when I was Lizzie's age.' And a small but brightly shining bullet of an idea was born.

I knew that there was a swimming squad for grown-ups, and that this squad split in two; they're called  Competitive Masters and Fitness Masters. In typical me-style it took me a week or two to ask the coach for advice - I sidled up to him as Lizzie was clambering out of the pool one day and asked nonchalantly exactly how fit did one have to be to come to the Fitness Masters?  He was encouraging, and so it took me a week or two more to find a swimsuit and turn up. 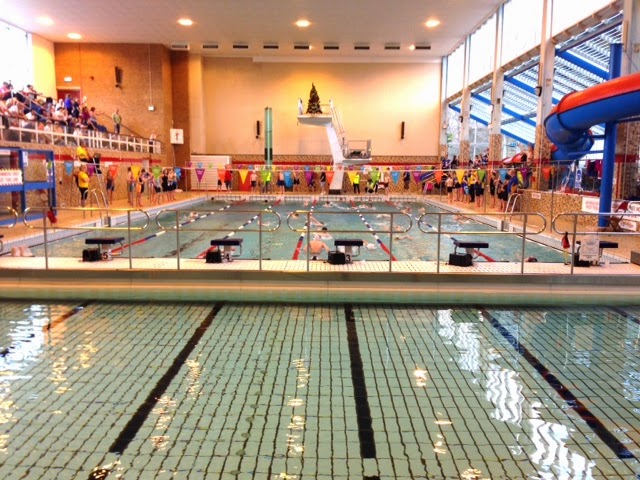 That first session was the hardest thing I have ever done in my life, I think, and I'm just talking about the long walk from the changing rooms to the far end of the pool. No matter how you dress it up, I was a fat, unfit middle-aged woman and most of the other swimmers were lithe and fit; even the ones older than me were the kind of lifelong athletes who've never let their bodies get as wildly out of shape as I have.

If it hadn't been for one lady I saw in the changing rooms who walked with me and told me I'd be fine, I might have sat in a cubicle pretending I wasn't there and gone home again. Ironically, that lady doesn't come any more.

It was that hard, and it didn't get easier for a long, long time.

Highs and lows. A monumental low when Lizzie's squad changed times and my session was straight after theirs; I had no choice but to come out to the Swim Club Mums that I climb into my own cossie and have a go twice a week. I had so dreaded anyone knowing about me; it had been my secret. The night before that first session at the new time I couldn't sleep for worry. I dreamed that God would take care of it, and He did. Not by changing the fabric of the building so that nobody could see me, sadly, because see me they did.

They saw me and they were amazed. Some of them were impressed and encouraging, and a couple of them weren't. Reactions ranged from mild hostility to a little snigger at my expense. I felt exposed and vulnerable; the worst had happened and yet.... I was still alive. I turned up the next time, and the next, and the world, strangely, didn't end.

These days I refer to swimming occasionally in conversation with these same Swim Club Mums - even those who were a little scathing. I've even started going for an occasional gentle swim with another Mum who wants to be more in shape and a number of them have asked me about it, saying that they wish they could do something like it too. I wave to them from the poolside these days, instead of hugging the wall like Spiderman in the hope I might get there unnoticed, and although I still drape my towel round me, I feel less desperate about dropping it and diving in than I used to. I don't care if they see me in a swim cap and goggles, and if I look like a raccoon afterwards, then so what? Everyone does.

Just before Christmas I went out for a meal with some of the other Masters Swimmers. My husband came too, and we had a lovely night. They are a really nice bunch of people. Former competitive athletes, open water swimmers, a cross-channel swimmer, people like me who wanted to get in shape, people who come for the companionship and the laughs as well as the cardiovascular workout.

They are very special people who have not the remotest idea of the huge and important part they have played in my life. If you've never been consumed by self-loathing, if you've never been crippled by body image and acute self-consciousness I don't think you can begin to imagine the feeling when you start to find a way out from under those things; a glimpse that things might one day be different. 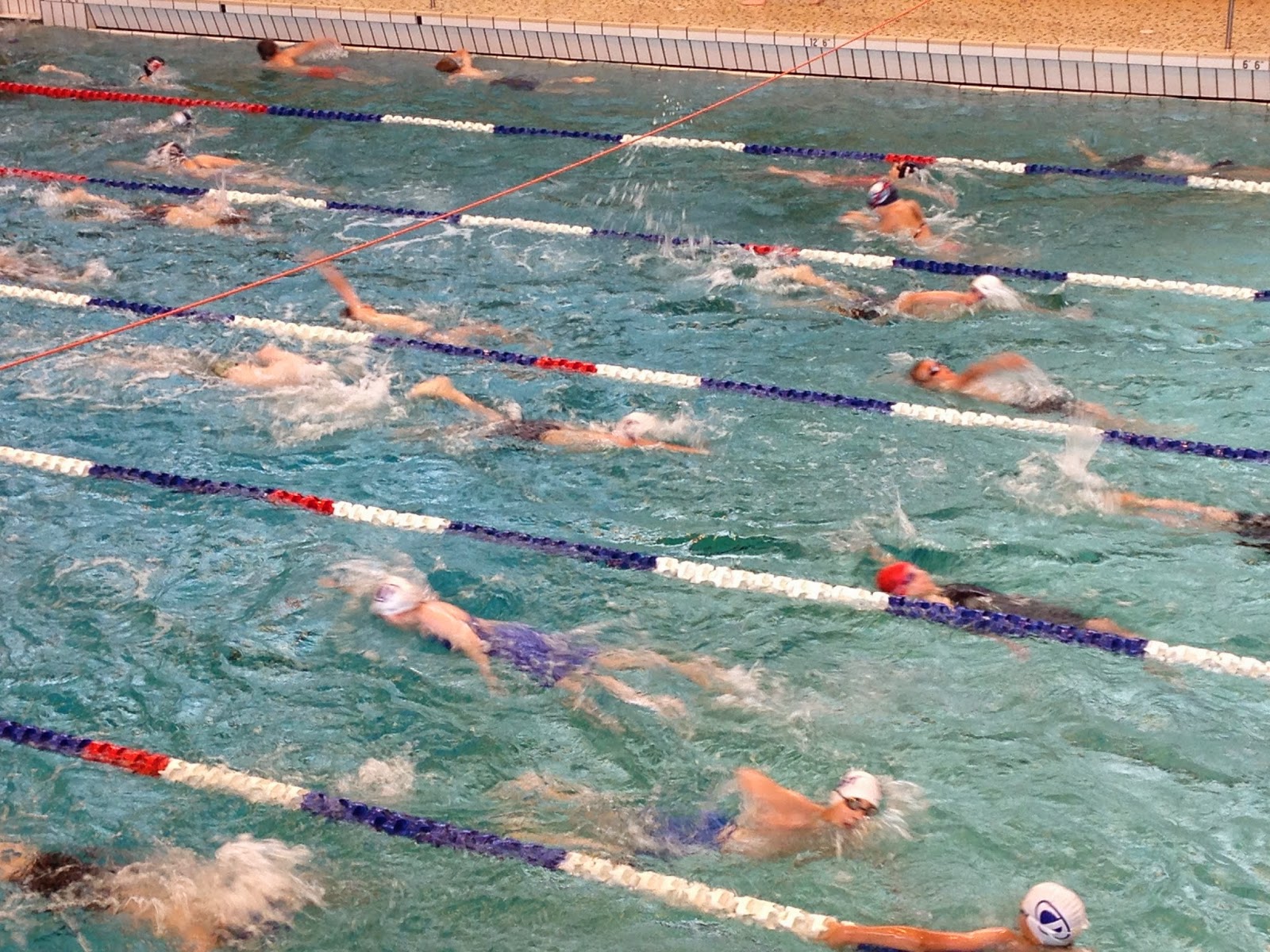 It's still a bit hard to motivate myself to get to swimming; especially on these dark, cold nights when bed beckons instead of a cold pool, but more often than not I go twice a week and I am seeing changes in myself.

Physically, I've lost a little weight, but not as much as I need to. It's a slow process, and I'm sure that I need to make more changes in my diet as well. I am changing shape, however, and I feel happier in my clothes, even though they're pretty much the same size.

My muscles are more developed, and my heart and lungs are much healthier, even though once again, there's a long way to go. I don't get as out of breath, I can swim for longer without a rest, and the rests are shorter. This is huge progress.

I am swimming better. I can swim 200m backstroke with a cup of water balanced on my forehead and it doesn't fall off (yes, really, we do that). My technique for front crawl is sleeker and faster than before, and I can swim 25m in eighteen and a half seconds. This is not particularly fast, (my nine-year old daughter can do it in less than that) but for me it's warp speed. I can swim a length under water and 50m on four breaths. My breaststroke has been taken apart and put back together again and it's loads better than it was, but the piece de resistance is that I can now, finally, swim a slow, clunky, unwieldy sort of butterfly after a year of looking as if I needed someone to throw me a lifebelt.

The fact that I can be forty-four years old, and still learn these things from someone who is willing to teach me with patience and good humour, among people who are warm, welcoming and encouraging amazes me. Who knew that such things happened?

However, I think the biggest change hasn't been physical at all. It's been emotional on the deepest level - I'd go so far as to say that it has changed my life. I'm not over-dramatising. People who know me well have said that I've changed enormously.

Take this for an example:

The last session before Christmas, I walked onto the poolside to find the coach waiting for us with a camera. The Competitive Masters squad had met with considerable success at a recent meet (medals, British and European records!) and the club had asked for a photo for the website, or possibly for a local paper. I hung back, since I was not among those competing, but he was adamant that he wanted the whole squad in the picture. Can you imagine how I might have reacted a year ago to the idea that anyone would try to take a photograph of me in my swimsuit, alongside these people with firm thighs, sporty bodies and medals hanging round their necks? Seriously?!

I can; I remember it well. All I can say is that I made sure I was on the back row (people in front of me) and I grinned broadly, swimsuit, no make up, hair that needed washing, eyes slightly out of focus as I'd taken out my contact lenses.  Say cheese.... click. I even forgot to hold my breath.

So that's why I have an affection for 2014. Things about me are only subtly different at a glance, but inside everything has changed. Early last year I was worrying aloud to a friend about the idea of joining the swimming and saying how hard it was, how awful it was, and she asked me why I was contemplating doing it at all. I said that it seemed right; it seemed as if God was in it.

Oh, how He has was; He has been. He is. He's been in the water right alongside me, and he didn't let me sink.

I am so grateful.