He lives! (with an exclamation mark)

A friend sent me a picture from the internet. It was a picture of Jesus bursting out of the dark tomb into bright sunlight. Strips of grave-cloths flying everywhere, it is a picture full of energy and movement.

I love the idea of Jesus' resurrection as a dramatic, triumphant thing, not something serene and subtle. I think He would have emerged from that tomb exhilarated, breathing deeply of delicious fresh air. He'd have had enough of the suffocating claustrophobia of death, the crushing sensations of tightly bound grave clothes, the airlessness of a dark tomb, the cloying fragrances of embalming spices and ointments.

He'd have stretched and flexed his muscles and thrown back His head and gazed at the starry sky - or the sunrise, or whatever time of day it might have been. He'd have lifted His hands and praised His Father in Heaven. He'd have smelled the grass and the dust and the flowers and felt the breeze in His hair and He might have smiled or even laughed to have conquered death so decisively.  He would have been wonderfully, thoroughly alive.

He wouldn't be floating six inches above the ground with blond curls beautifully coiffed, hands folded in the sleeves of His pristine white robes and eyes downcast demurely. He wasn't a ghost, or an apparition; He was real.

Jesus was a man. He was a carpenter, and then He was constantly on the move, so I reckon He'd have been in pretty good shape. He'd have had wonderfully strong arms and capable, calloused hands. He'd have been lean and well muscled (maybe even a six-pack, though that might be going too far). 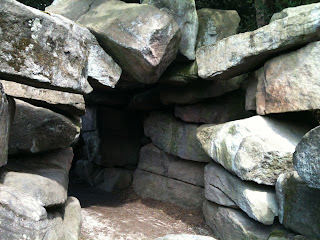 He might not have been particularly tall; it seems that middle-eastern men in that era weren't particularly tall, and He'd have had olive skin, dark hair and brown eyes. We know from the Bible that He was not an especially handsome man - nothing that would turn heads if He walked past.

I have an idea that if you looked into His eyes - if He was talking to you, if you had His attention - that perhaps that might have been another story. I think you'd have seen in His eyes something that you'd never seen before; you'd struggle to take your eyes from His.

I bet He had the kindest eyes you've ever seen. Warm and intelligent and sincere. Eyes that could see into your soul; that could understand all the things you could never say, the good and the bad, the hopes and dreams and fears and regrets - and yet still you would know that He loved you. I think you'd have seen fun in His eyes; a joy of being alive alongside the sadness and compassion He had for the poor broken creatures that lived alongside Him.

I think that Jesus was a man before and after His resurrection. Afterwards He was one hundred per cent alive, just as He was before. Blood was being pumped around His body, lungs filling with air, feet on the floor and all His senses keenly awake. I think He'd have enjoyed those days after His resurrection; He'd have been triumphant and joyful. He'd have known there was a job still to do, but He would surely have had a sense of satisfaction. He had done it, after all.

I have no idea at all where He spent those three days after they lifted Him down from the cross and placed Him, bathed with tears, in Joseph's tomb. A friend of mine mused:

"Easter Saturday fascinates me, as one of those "between things" times, which is neither one thing, nor yet quite the other. Schroedinger's Saviour lies in the tomb (or does he?), resting for the Shabbat, and yet Peter hints that Jesus was already roaming the underworld freeing prisoners and causing his usual mayhem. Why not both? Why not be in three places at once? My God is beyond comprehension, wrapped in grave clothes whilst dancing at the pinnacle of heaven mantled in new authority and descending to the depths to set the captives free."  Karen Dibbens-Wyatt, April 2015

Why not all three places? It's a mystery beyond any human comprehension that a man could come back to life after he was categorically dead, and so all bets are off, I reckon. He might have disappeared from that tomb magically and turned up on the other side of the stone, or He might have pushed it away with superhuman powers. He might have vanished moments after He was laid in the tomb and visited Heaven and hell and all places in between, since God is outside time; there was no clock-watching throughout those three days. Who knows? I wonder if one day I might hear Him tell the story.

I like the picture of Jesus bursting from the tomb with untold power and energy. I see Him standing outside in the morning sunlight anticipating Mary's arrival and smiling to Himself as he relishes breaking the news. I think He enjoyed appearing amongst His disciples and looking with affection at their astonished faces.


'...he showed them his hands and feet.  And while they still did not believe it because of joy and amazement, he asked them, ‘Do you have anything here to eat?’ Luke 24:40-41

I think that He'd have smiled gently at Thomas as He offered proof of His death and His life.

Because, obvious as it sounds - the penny drops - if Jesus died, and rose from the dead, He is still alive today. Normal human rules do not apply to Him. For us, there is nothing so certain that we will one day cease to live, but for Him: been there and done that. It didn't work.

He lives! And He didn't sneak out of the tomb apologetically, it would have been a momentous moment. The whole of the universe would have changed forever.

That's worthy of an exclamation mark, and I use them very sparingly.

He knows what death is like, and He knows what lies beyond. He says it's safe for us to follow; more than that - it's glorious and beyond our wildest dreams. He says that He's prepared a place for us to be with Him for eternity. But if He's battled death and won, He is not waiting for us in the place beyond death, He is here on this side too. He can go where He wants.

If that doesn't blow your mind, I think nothing ever will.