This is a little something I wrote as an exercise on a writers' weekend. We had to write a parable; a narrative that held a deeper meaning. Something that could be read on different levels, allowing the reader to pull out truths as they saw them, embedded in story. Here it is.
My Friend (first published as 'Treasures Everywhere')
This afternoon I went for a walk with an old friend. We haven't spent time together for quite a while - I'm not sure why. He's always good company but I've kind of got into the habit of walking with other people, or even just by myself. That's when there's time for things like that at all, of course; everything is such a rush these days!  Anyway, my friend seemed a little surprised to be asked but as soon as he heard my voice he was full of enthusiasm. So delighted was he to hear from me that my pleasure was tinged with a little guilt, if I'm honest.Anyway, we went for a stroll on a beautiful sunny summer's day. It was very pleasant. We chatted about this and that - or at least I did; he didn't say very much and so I felt a bit as if I needed to fill the gaps in the conversation. I probably went on a bit but if he found my monologue tiresome he didn't let on. He just listened and smiled encouragingly. 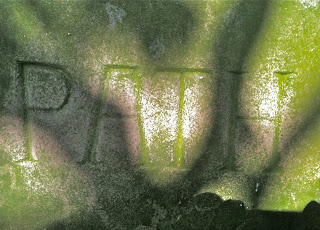 We reached a point where the path forked into two. Left or right? I hesitated.My friend knew the area much better than I did, so I asked him which was best. He shrugged  and told me it was my choice. I felt a pang of irritation at his reticence, but quickly rallied.After scrutinising each path, I chose the one that looked easiest walking. I was only wearing my battered old flip flops; not the best choice for a walk in the woodland, as it turns out.I chided myself that I should have been more prepared. I hadn't really given much thought to what I'd need before I set off.Easy walking indeed! Before long the path took a sharp and rocky upward turn. I set off up the steep gradient somewhat hesitantly as it would have been very easy to slip in my inadequate footwear. A couple of times I felt the reassurance of my friend's hand on my elbow, which was very welcome. I was soon out of breath and stopped talking to him completely. Again, he didn't seem to mind but stayed beside me as we climbed. Later I realised that when we got to the top and flopped down for a much-needed breather I should have thanked him for his assistance, because I'm not sure I'd have made it without him, but embarrassingly, it didn't cross my mind.Funnily enough, it was the downhill section where I nearly had an accident.  Feeling more confident, I had taken the lead and my friend did not call me back as I strode off ahead. He followed not far behind, but let me do my thing. I very nearly came unstuck as my bare foot slipped on some loose rocks and I stumbled badly. After that rush of adrenalin I slowed my pace a little and stayed closer to my sure-footed friend. The experience had also taught me to pay closer attention to the path to try to avoid another mishap.I was so focused downward that I would not have seen the baby rabbits playing in a clearing, if my friend had not gently stopped me and pointed. What a delight!  He encouraged me to slow down and not worry so much about each single step, or what was round the next corner. I resolved to follow his advice and go at a more leisurely pace so that I didn't miss any other wonders along the way. It is too tricky to concentrate on one's feet and take in the scenery at the same time.After a while, we had a welcome rest on a bench. My friend produced a bottle of cool water and handed it to me. I looked at him in astonishment; he seemed to know just what I needed! I drank deeply - almost forgot to leave him any if I'm honest - and felt much revived. I sighed happily as we took in the vista below our vantage point.The woods opened out below onto a lush meadow of wild flowers bordering a small, still lake. It was the perfect spot - so very beautiful. I could feel the gentle breeze cooling my forehead and hear the whisper of the trees and the song of the birds. I slipped off my sandals, felt the soft grass soothe my sore feet and inhaled the fragrance of honeysuckle. What a treat! I smiled broadly at my friend, who seemed to be taking pleasure in my relaxation. 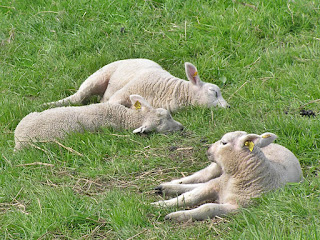 Much restored, we resumed our walk at a much gentler pace. Neither of us said very much; conversation seemed unnecessary.We walked companionably side by side, stopping often to admire a flower, a leaf, a ladybird. My friend had the gift of spotting nuggets of interest that I would have walked past, but as I paid attention and fell into step with him, I began to notice more and more for myself. Each time I paused to examine something, my friend encouraged me with his delighted response to my observations.We rounded a corner and I realised that we were almost at the spot where the path had divided earlier. The sunlight filtered through the canopy of trees lighting up the leaves in more shades of green than I had known existed. I remarked that it had not really mattered which route we took through the woods; there were treasures to be found everywhere! My friend laughed affectionately and I felt full of gratitude toward him. His company had made all the difference.It had been such an agreeable afternoon that we made plans to meet again for another wander in the woods. My friend somehow seemed to have all the time in the world and would have agreed a date and time immediately; he seemed a little disappointed as I flicked through the pages of my well-worn diary for the next few busy weeks and drew a blank. I promised to telephone him at my earliest convenience.
We said our goodbyes and I left him leaning on the stile at the end of the path to the woods watching my departure with a strange look on his face.Glancing at my watch I realised that a number 62 was due from the high street any moment. If I got a wriggle on I could be home in time for the prayer meeting at church.I hurried towards the bus stop.
Posted by Helen at 3:08 pm