Here's something I wrote a while ago on the subject of doors. Specifically, the kind that God opens when you knock.
Hello, God. I just want to run something past you.
You know when Peter was miraculously released from prison? I know it in terms of Acts 12 in the Bible, but I imagine you remember it as if it were yesterday.
Peter was in prison and then it got all dramatic; an angel appeared, chains fell off, doors opened by themselves and Peter walked free. I know he was pretty confused because it tells us so. At first he thought it wasn't actually happening to him, but just a vision, and then as the angel left and Peter is standing in the street gaping.
It says that '...when he came to himself...'(Acts 12:10) he makes his way to where he knew his mates were hiding. I wonder what he was thinking. Amazed, scared, awestruck, confused, overjoyed, excited? I'm quite sure that he couldn't wait to find his friends and tell them what had happened. Then maybe a glass of wine or two?
So he knocks on the door and Rhoda answers it.
'Peter! Wow! We thought you were in prison! It's a miracle! Come in and tell us all about it.'
Nope.
'Peter knocked at the outer entrance, and a servant named Rhoda came to answer the door. When she recognised Peter's voice, she was so overjoyed she ran back without opening it and exclaimed, 'Peter is at the door!'
Acts 12:14
The disciples and Rhoda debate this for a while. Surely not. Peter is in prison. He's not at the door. Maybe it's his angel? (Seems to me that the disciples at this point were much more used to angels than we are these days. Why is that? If I'd been there I'd have suggested that it wasn't Peter at all but perhaps someone who sounded like him, but no, his angel).
Anyway, Peter's still at the door. Ahem. Knock, knock.
It is Peter. It isn't Peter. Yes it is. No, it can't be. And so on.
Knock, knock.
'But Peter kept on knocking, and when they opened the door and saw him, they were astonished.'
Acts 12:18
When they eventually open the door, Peter can get in. I'd love to have been there.
'Of course it's me, you halfwits. I've been out there twenty minutes!'
Acts 12:18b (my version).
How wonderful, the tale he tells. A miracle indeed! Saved from Herod and secure in the knowledge that God Almighty is watching out for him and has a job for him to do. I bet the wine flowed and they talked into the night, even after Peter left (it says, '... for another place.' Where? That sort of thing intrigues me. Where did he go?) 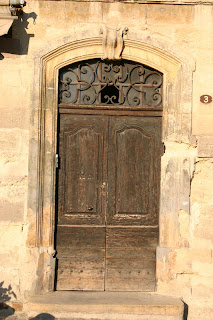 Anyway. It was a night to remember indeed.  I bet songs of praise were sung.
The thing that made me think was this: the disciples had been praying and praying for Peter.
'So Peter was kept in prison, but the church was earnestly praying to God for him.'
Acts 12: 5 NIV
They prayed earnestly. They prayed, presumably, that he would be alright, that he wasn't having too nasty a time, and that he might soon get out of prison.
So they pray that he might be released, and he is. And yet, when he arrives at the door, they don't believe it. To the extent that Rhoda leaves the poor bemused man standing in the street knocking and knocking and looking over his shoulder for prison guards while she gets a bit high pitched in the living room with the disciples.
They prayed fervently and their prayers were answered. And yet they were astonished.
Nothing changes, does it? How incredibly reassuring that the disciples were taken aback and disbelieving when their prayers were answered just like I am.
I pray about something (how often can I actually say I pray 'earnestly'? Feeling a bit uncomfortable about that) and then, sometimes, I am aware that you have answered my prayer. Of course, I suspect that you answer them much more often than I realise, but on the occasions where I see it and recognise it, what do I do? I run about like Rhoda telling people, 'You'll never guess what's happened! It's amazing!'
So I pray in faith, and yet I don't expect an answer. I'm sorry. The faith part is a bit thin, hey?
Is it a sign of spiritual maturity when answered prayer, even the dramatic type, doesn't send me into a flat spin? When I'm not 'astonished' as the disciples? When I can say, 'Of course God answered my prayer. I'm not surprised; I knew he would'. Hmm. Is that faith, then?
I think so.
'"Jesus replied, 'Truly I tell you, if you have faith and do not doubt...you can say to this mountain, 'Go, throw yourself into the sea,' and it will be done."'
Matthew 21:21
Ah. It's about the measure of faith, then. Is it possible for me to have a faith that can move mountains? I pray and I think I'm not doubting... but I'm wavery and wondering and I can't honestly say that I'm particularly earnest, much of the time. I'm in good company, because the disciples (who clearly did a better line in earnest) were astonished and doubtful when it came to answered prayer. Thank you for their humanity; they were the very foundations of the Church and yet were reassuringly slow on the uptake.
Of course, the bottom line is that it is always a breathtaking, awe-inspiring wonder that the God of the universe would listen to me at all, let alone answer a prayer in my little life? I can't imagine taking it in my stride, or being unimpressed.
I think for now I'll go on trying to practice praying earnestly, and I shall be on the lookout for answers in an expectant kind of way.
Help me to notice more of the answered prayers that I know are heaped up all around me. Help me to be more sensitive to your hand in my life, Father. Show me how to pray with expectation, not just with a vague hope, for insurance, on the offchance.
Give me more faith, Lord. I want to be faith-full. I want to hear from you so often that your voice is familiar to me. I want to chat. I want to listen. I want to pray in such a way that your will is done, here on earth, as it is in heaven. I want to bring a little bit of your Kingdom right here.
You said that when I knock, the door will be opened. Help me to believe that.
Help me to believe that.
My God is good. He answers prayers.
Posted by Helen at 5:47 pm